A relaxed girl who constantly plays video games, despite not being very good at them.

Kotoha("Koto-chan") is a caring, loving, and a gamer. She loves playing video games all the time. She can be serious sometimes but other times she loves to hang out with her friends. She's also smart at winning the game. She does love to wear her favorite hats all the time. Her only special and secret ability is her smart thinking in a hard game.

Kotoha has long blue hair which is tied into a little ponytail at it's very end. She has many outfits, but the color blue appear in most of them.

Kotoha wears a pale blue dress with blue lining on the bottom and the sleeves. She wears black leggings and white shoes. She has a black over the shoulder handbag with white fabric. She wears a white hat with dark blue ears attached.

She wears a pale pink dress with white pattern pockets. Her sleeves are white and she has a white bow tie ribbon on her collar. She wears blue shoes and carries a pink over the shoulder hand bag. She wears the same hat in outfit 1.

She wears a blue dress with a blue pocket on the left. There's a white bow attached to the pocket and there's white fabrics on her front chest collar. She wears brown sandals with an orange bow on them. She has an over the shoulder hand bag with a white strap and she wears a tan hat with a peach bow. 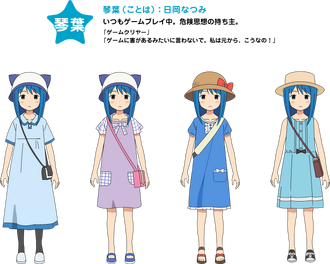 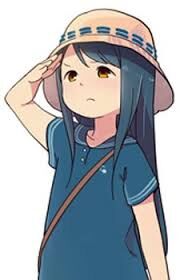 Retrieved from "https://mitsuboshi-colors.fandom.com/wiki/Kotoha?oldid=672"
Community content is available under CC-BY-SA unless otherwise noted.